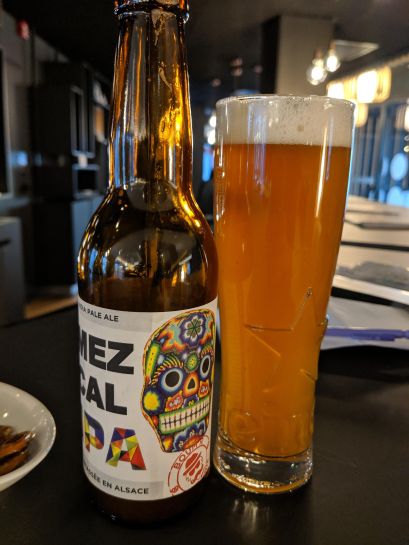 A similar aroma to a wheat beer with a lot of grapefruit, some basil, pepper, and a touch of Belgian funk. Not as acidic as expected, but some good lemon tones and a touch of farmhouse funk from the French yeast and malt.

Lovely roasty nose with note of coffee and peat. However the mouthfeel on this stout is extremely light and the flavor is more of acidic coffee with just a touch of dark fruits. All in all, this beer smells more like Guinness Foreign Extra Stout, but tastes like a regular Guinness Stout and is very thin.

This beer was exceptionally funked and had a bold weed nose with notes of honey. On the palate we got a lot of honey, but the flavor overall was not good. This beer was too sweet with almost no bitterness and is best described as a very bad German lager.

A little bit of grape must on the nose goes well with the rest of the standard West-Coast IPA tones we are used to in American beers. This beer is very much a French attempt at a West-Coast IPA with some light grape tones. Supposedly very hoppy, but not by our American standards.

We were rather impressed with the French craft beer we tried, however the Kronenbourg was absolutely terrible. With the freedom to brew without following tradition it is fascinating to try out all the new beer that can come from this traditional wine power, however we just need to get it over to America! Travis and Courtney preferred the Bisaigue IPA while Andrew and Laura thought the Boum’r White IPA was the best.